Welcome to the second and final part of my review of the best photography (from my world) of the year and the stories behind the images.

This part covers the months July to December.

In the first entry, we get two images for the price of 1. 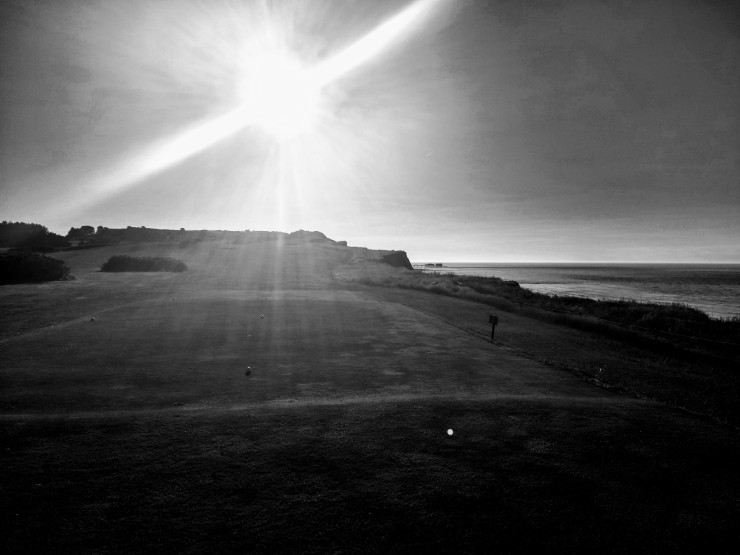 I love the colours of golf courses – the spectacular autumn shades being my personal favourite. I do think, however, that black and white works well in the pair of images above.

These shots were taken on my phone on 2nd July and feature the 6th hole (bottom) and 14th hole (top) at Royal Cromer.

The 6th hole is located at the most Easterly point of the course. It is a long Par 4 (Stroke Index 1) that runs along the cliff-edge. It is at this point of the course that RCGC has suffered the greatest volume of cliff-fall. A hundred years ago, there was a further hole to the right of the current 6th. In total, around 80 yards has been lost in this location over the 130 year history of the Club. I adore the view down the coast towards Cromer Pier from the 6th tee – a landmark recently made famous by the BBC Christmas feature.

The 14th hole, with the iconic lighthouse to the right of the green, is much photographed by the many visitors to the area, but I love this slightly unusual worms eye view of the hole. I had much fun researching the history of the course this year, and in particular the birth and development of this signature hole. You can read that blog here.

Everybody loves a rainbow, right?

This image was taken on my phone, alongside the 14th hole at Royal Cromer on 10th August.

What I like about this particular shot is the timing. I did not rush out of my office to see the rainbow – this was actually taken during a competitive round of golf. For 13 holes, I had slogged around the course in the pouring rain, and then suddenly, as we trudged wearily towards the 14th tee, the clouds parted and the rainbow was created.

Moments after this picture was taken, another rainbow appeared (you can just make it out above the obvious one in the photo), but by this time, pace of play meant I had to go and hit my second shot.

The views from this hole are truly spectacular. There is a wonderful walk from the centre of Cromer, along the cliff and course edge to Overstrand and back along the beach, making sure you have checked the tide times.

Next up are a couple of shots taken on my trip to the British Masters at Walton Heath on 13th October. 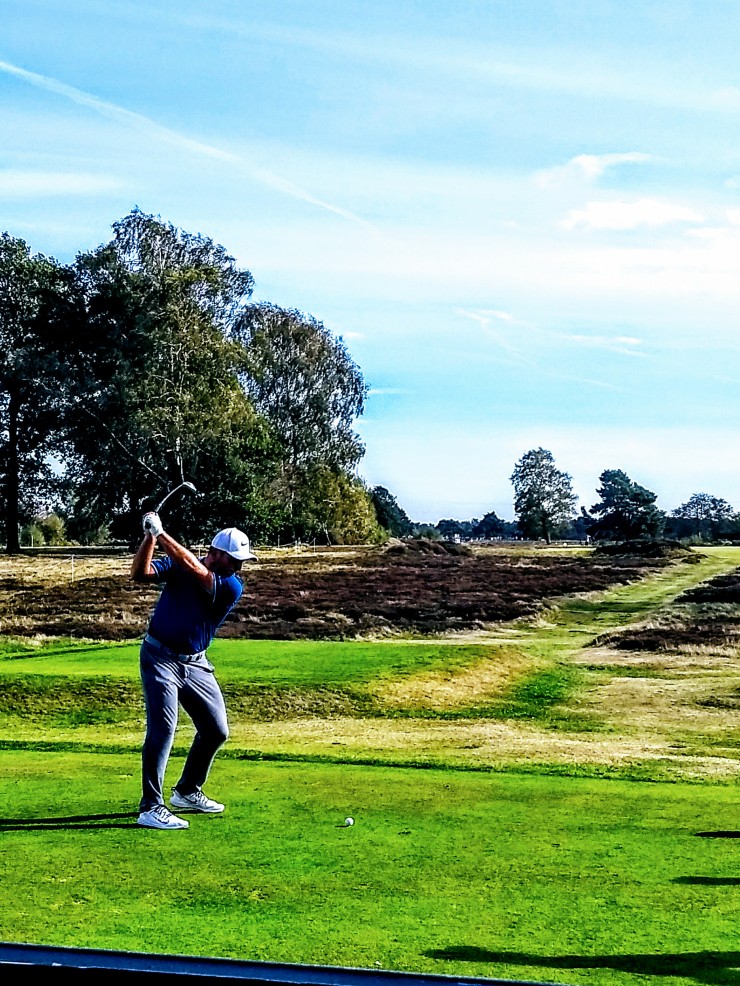 The top image is taken from the middle of the 18th fairway towards the final green. It shows some of the defining features of a magnificent course – the heath and fearsome bunkers.

It also demonstrates the clever organisation and marketing of the event by the European Tour and chief sponsor Sky Sports – that is a large image of ‘host’ Justin Rose behind the green. Both of these organisations should be applauded for their investment, innovation and commitment to growing the game.

The image also shows the difficulty that many courses in England experienced during and following on from the long dry summer – with the fairway looking brown and patchy. Do not associate the colours though with poor conditioning – Walton Heath was playing beautifully.

The bottom image is Frankie Molinari hitting his tee shot on the Par 4 13th hole. The Italian had won The Open just a few months previously and although he was showing signs of fatigue at Walton Heath, it was an absolute pleasure to follow him for a few holes.

Molinari demonstrates very classical technique and rhythm that makes him a great model for young golfers, but he has also been clever enough to address his previous weaknesses of a lack of distance from the tee and weak short putting in order to raise his game to Major Champion levels. He has achieved this through improvements in physical conditioning, swing technique modifications and equipment changes. Again – a perfect model of the holistic approach required to maximise potential.

The final pair of images were taken on different walks during December at RCGC but share a joy of taking a camera but no clubs that I have grown to love this year.

Whilst my enjoyment of playing golf has not diminished, the purity and relaxation of strolling alone to capture images that you can look back on forevermore has begun an addiction in me that I was not expecting. There are always new details to capture and every time out is different.

The top image looks back from behind the 18th green. This is the only double-tiered green on the course and the picture captures the length and quality of the putting surface well. I love the foreboding blackness of the bunkers and the cloud formation with the sun breaking through to the East.

The bottom picture captures the 17th green from the 16th fairway. The view is in a South-Westerly direction, with the East side of Cromer captured in the distance. With the North Sea visible from every hole at RCGC, most photos naturally point in this direction, so this image is quite unusual and I like that.

The 17th is a tiny little 120 yard Par 3, but you get a good impression from the photo of the problems of missing the surface to the left hand side. The green has an infinity feel to it from the tee, which helps to get the golfers heart rate soaring.