The Ryder Cup presents a pressure cooker environment like no other for the top golfers of Europe and the United States. Even the back 9 at Augusta in the Masters or St Andrews in The Open cannot match the exacting requirements and unique cauldron of the biennial team event.

As such, we see the stars of the event stripped down to their core, with every asset of their mental beings examined in the raw. This allows us to learn a great deal about their games and psyche. In this blog we will analyse the 24 participants in the resounding    17.5 – 11.5 European victory and ask what we have learnt about them and what their future may hold. 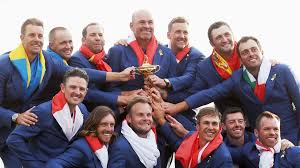 Brooks Koepka – Showed the class of his golf game each day on a course that was set-up to show up his weaknesses. A high-class singles match with Casey ended in a fitting half point each. The very definition of the modern ‘athlete’ golfer, his game is tailor-made for major championship venues and more titles surely await.

Dustin Johnson – The World Number 1’s personality is not made for team events and his subdued showing was no real surprise. A badly timed experiment with a left-hand low putting grip led to a shocking showing on the greens on the first two days. It is likely that the ultra laid-back Johnson will be able to quickly shrug off the week, return to a standard putting grip and continue to be a world top 5 player.

Justin Thomas – The unofficial leader of the US team and their strongest player on the week. Thomas showed his class by downing McIlroy in the top singles match. Conducted himself with authority and grace throughout the week and is surely destined for further Major titles.

Patrick Reed – ‘Captain America’s’ title was firmly wrestled from him by his own teammates as they rejected his abrasive style. Seemed subdued in a poor match-up with Tiger and his game suffered. Gains credit for coming back to win his singles match but has few friends left on either team. I doubt he cares much but is in a lonely position where he is battling both fellow players and media. Could take its toll on his future career.

Bubba Watson – His game was a terrible match for the course set-up and it showed. His individual, quirky personality is not a great fit in a team environment and you wonder how much he cares for it. As outside interests continue to grow and younger, hungrier American players come through, this could be Watson’s final Ryder Cup appearance.

Jordan Spieth – One of the toughest competitors on the team, Spieth competed well in all four pairs match-ups. As in previous team events, fatigue took its toll in the singles. This was a mistake by Captain Furyk who should have rested him before the final day. With such a strong mental game, Spieth should continue to compete for Major Championships in the coming years.

Rickie Fowler – You do wonder when Fowler will take the next step in his career. Should surely have been given a more prominent leadership role in the team. As he moves towards a settled, married life, it is possible this could help him take that final step to claim the Major he craves.

Webb Simpson – As one of the few American players whose game suited the course, Simpson excelled and should have been played more in the pairs. Like a few of the European’s, I am not sure his stellar week should draw conclusions about winning future Major’s, but could continue a consistently good career for a few years yet.

Bryson DeChambeau – A harsh introduction to the Ryder Cup. His game has matured wonderfully over the past 12 months but another whose quirky personality is not a natural fit for team golf. Super intelligent and will learn a great deal from the experience.

Phil Mickelson – A total disaster and in hindsight a poor Captains pick. Furyk must have known the likely course set-up and how Kisner or Kuchar would have suited better. In a funny way, the total train-wreck of Mickelson’s performance may just be the motivation he needs to make the team in 2 years time for a more appropriate Ryder Cup swansong.

Tiger Woods – His 0-4 record reflects slightly harshly on his performance. Played some decent golf with little rewards. Very difficult to match his dominant personality with a partner and this showed with Reed and DeChambeau wilting in his presence. Still great to see him back at the top-level and able to play 36 holes in a day. Will rebound and expect a decent showing in 2019.

Tony Finau – His play veered between the sublime and the ridiculous and back again. Showed a good game for match-play and his temperament coped with the pressure admirably. Super-talented and if he can remove some rough edges without losing his natural instincts could compete for Major Championships.

Francesco Molinari – A 5-0 record speaks for itself and is even more remarkable given his previously meek performances in the event. His putting and mental game have reached a whole new level this season and his pure technique, rhythm and balance is great to watch. A potential World Number 1.

Justin Rose – Came into the event as the new FedEx Champion. Mixed performances during the week but his game still looked great relative to the competition. Has little to prove at this stage of his career but if he can stay fit and motivated, it would be a surprise if he did not add to his Major Championship victories.

Tyrell Hatton – His game looked a little below the very best players. Kept his volcano like temperament in check but perhaps more fire would have been good in match-play.

Tommy Fleetwood – Exquisite ball-striking and combined with Molinari for a perfect 4-0 record in the pairs formats. The toll of the week caught up with him in a poor singles loss and still needs to cut-out the ‘big miss’ in order to win Majors.

Thorbjorn Olesen – Slightly unlucky to only play once before the singles but came out hot in this format to take down the impressive Spieth with a stunning run of birdies. His technique and rhythm look a little inconsistent compared to the best players in the world but he has made rapid progress to reach this point.

Jon Rahm – A very impressive singles victory over Tiger Woods in his first Ryder Cup sent a positive message about the game and character of Rahm. Another step forward in his fledgling professional career.

Rory McIlroy – Conducted himself impeccably throughout a difficult week on a course unsuited to his game. Whilst McIlroy continues to strike the ball with authority, he is arguably no longer the best player in the world when everybody is playing at their best. Combined with an inability to raise his putting to the levels required, it looks increasingly unlikely that he will add to his Major titles.

Alex Noren – The dogmatic Swede was at his best on the tight Le National layout. Extremely hard-working, strong-minded and with a solid but one-dimensional game, Noren should never be ruled out on a tough golf course.

Ian Poulter – A fantastic victory over the World Number 1 in the singles cemented Poulter’s cult status as a Ryder Cup hero. Probably in the twilight of his career, if Poulter does not make another RC team, this was a fitting end. Fortunately Europe seems to have a heir apparent in Matt Wallace.

Sergio Garcia – An extremely gutsy and emotional week for Garcia, who became the record European points scorer with a final day singles win. Perfectly formed for team play, but this week is unlikely to stop the downward trend in Garcia’s game and could struggle to stay among the top echelons of the game as his technique struggles to be maintained as his body grows older.

Henrik Stenson – Brilliantly managed by Captain Bjorn, who rested Stenson and his fragile body for both fourball sessions and was rewarded with a 3-0 record from Stenson. A majestic ball striker, if he can stay injury free then he can win more titles.

Paul Casey – Has had some physical and mental battles over the years, but showed skill and courage with some stellar play throughout the week. Seemingly has the game to match up with tough golf courses. Will this week and in particular his toe-to-toe half with multiple Major Champion Koepka help to give him the confidence to bag his own big victory?