With a forced carry up a gorse strewn hill to the fairway, 120 foot cliffs cascading down to a golden beach hard to the right of the tee and a working lighthouse beside the green, it is not hard to see why the 14th hole at Royal Cromer has become the North Norfolk venues signature hole.

This blog will detail the 130 year history of the hole, its current layout and the future plans.

Royal Cromer Golf Club and its signature hole owe their existence to the enthusiasm and passion for the game of a Mr Henry Broadhurst MP. In the 1880’s, whilst holidaying in Cromer, he recognised the potential site for a golf course near to the lighthouse.

The original 9 holes were laid out by Broadhurst, assisted by George Fernie of Great Yarmouth. At this point, the hole was played as the 2nd, measuring 254 yards to the existing green, starting from a point near to the current start of the fairway that has now been lost to the sea.

In 1895, with the help of Old Tom Morris, the course was extended to 18 holes, although the signature hole retained its yardage and its place as the 2nd (the clubhouse and 1st hole at this point sat below the lighthouse in ‘Happy Valley’).

The year 1911 saw the beginning of plans for extensive re-modelling of the course. It was JH Taylor who was called in to oversee the work which was eventually carried out in the autumn/winter of 1912-13, opening for play in March 1913. At this point, the clubhouse was also moved to its present location and the signature hole moved position to become the 15th. The tee was also moved back to its current position and length of 395 yards. It must have been a truly fearsome challenge with the equipment of the time!

In 1924, the legendary architect James Braid was employed to make improvements to the course. Although significant alterations were made, including 2 new greens, Braid wisely decided to leave the signature hole unaltered.

Although the length and design of the hole have largely remained unchanged since 1924, it has not always been so close to the cliff edge.

There has been around a 50 yard loss since the opening of the course, although no significant change since the great cliff fall of 1962.

There has been a light on the cliffs at Cromer for 200 years, originally a coal-fired lantern and then a flashing beacon, known locally as the ‘will-o-the-wisp’. The present 18m high octagonal tower was built-in 1833, to replace the original lighthouse which was lost to the sea.

Although there is still a live-in lighthouse keeper, the neighbouring property is now a high-end holiday rental.

The Second World War saw 3 holes at the far end of the course reclaimed to use for crop growing. Golfers replayed the 3rd, 4th and 5th holes in order to make up the full course with our signature hole remaining untouched.

There was a short-lived experiment in the 1970’s to reroute the course in order to create two loops of nine. This meant that the signature hole became the 18th – what an exciting finish!

This experiment was killed off by the introduction of the new 2nd and 3rd holes in 1978 – created to replace the old par 3 second (played from beside the current 1st green to a putting surface to the right of the current 2nd tee) and the old 17th (to the seaward side of the current 8th hole) that was lost to the sea. The signature hole therefore claimed its present place as the 14th.

In the mid-1970’s, Tony Jacklin selected the hole as one of his favourite 18 in England. With the help of a helicopter he played all eighteen in a day for the Duke of Edinburgh Charity. Starting at Royal Lytham & St Annes, the Lighthouse hole at Cromer was Jacklin’s ninth. Exiting the chopper on the nearby 15th fairway, the Open Champion calmly hit a drive and 7-iron onto the green for an easy par, before rushing back to his transport to head to his next stop.

To the Present Day

The present day signature hole remains relatively unchanged since 1924. Recent years have seen great improvements to the quality and coverage of grass to the fairway. A bank and run-off area has been created to the left of the green, actually to avoid lost balls in this area. The bunkering has been refurbished, reshaped and deepened. A new blue tee has been introduced for shorter hitters in 2017, interestingly close to the point where the original tee from 1888 was located.

As Royal Cromer moves through it’s 130th year of existence in 2018, a number of subtle changes to the signature hole are under discussion. A new Championship tee may be added on the cliff-edge side of the footpath to add length and combat modern technology.

There could be some movement of earth near the fairway marker-post to make the landing area more visable from the tee.

Will we see a cliff fall and more land lost to the sea? Nobody knows, but the cliffs look stable in their current state.

The wonderful lighthouse hole at Royal Cromer has been taken on by many Open and Ryder Cup Champions over the years including Harry Vardon, JH Taylor, Nick Price, Peter Allis, Tony Jacklin and Georgia Hall as well as Prime Ministers and members of the Royal family.

Are you up to the challenge? 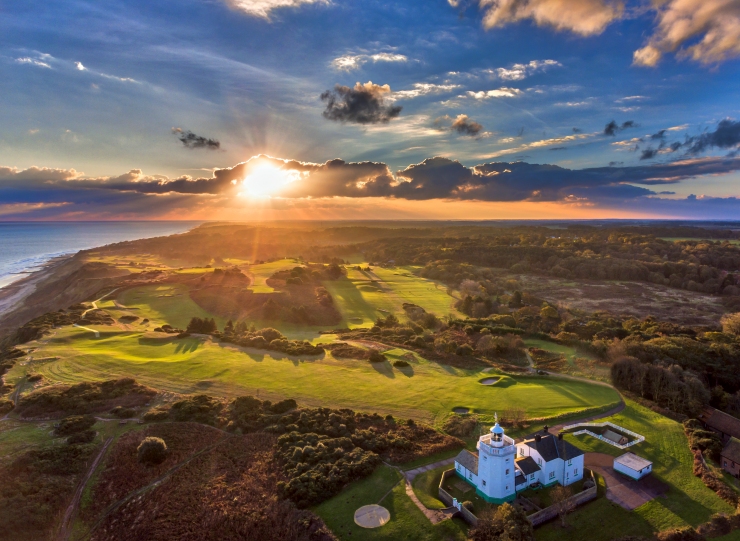 1 thought on “History of a Signature Hole”