Welcome to the first in my series of blogs that will analyse the state of PGA or European Tour players games – their strengths and weaknesses, what they need to improve and my predictions for their future.

This feature will highlight Andrew ‘Beef’ Johnston, the English professional who injects desperately needed personality into the largely bland world of the modern European Tour.

Whilst ‘Beef’ may look and eat more like the average golfer than the stereotypical modern athletic tour pro, in 2018 his golf game is quietly developing into something way beyond average.

The statistics show that improvements in Driving (power and accuracy), iron play and short game have contributed to a 1.5 shot improvement in stroke average and a movement towards world-class.

Idiosyncratic posture and grip set the tone for the basis of Johnston’s technique. 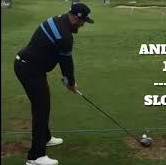 A very strong left hand grip, posture where the upper body is set in a dominant position over the ball, combined with open shoulder alignment (notice the left arm visible below the right in above photo) help to shape the swing that follows.

At the top of the swing we see good flexibility for a big chap and a closed clubface – the result of the strong left hand grip.

From the top, his upper body posture set at address allows him to dominate his move through the ball with his shoulders, helping to hold the clubface off from its position at the end of the backswing and keeping it square through impact.

The end result is a repeatable motion dominated by his powerful upper body. Relative lack of lower body involvement mean that he is not the longest hitter, but he is long enough.

Relative lack of clubface rotation through the ball mean that he is deadly accurate with his irons but his strong grip can cause pulled shots to the left when his timing is off. The grip can also make it more difficult to play the more delicate short game shots on occasion.

The greatest strength of Beefs game is undoubtedly his accurate ball-striking. His consistent play makes it rare for him to miss a cut. His game is potentially on the cusp of the next level – if he could improve his wedge play and putting by 0.5 of a shot each (relative to the field) then he would be a contender for Ryder Cup selection and regular tournament victories.

It would appear that his game is particularly suited to tough golf courses – he currently ranks 8th in bogey avoidance on the European Tour. This would suggest that the tougher courses of the PGA Tour and the Majors would be a good fit for him.

Of all the majors, look for strong performances in the Open. With a low and very straight ball flight and great rhythm to his putting stroke, links golf is a great chance for Beef to be successful. If he makes the field, then Carnoustie in the wind this year would seem to offer a fantastic opportunity to contend.

Almost no-matter what level Beef’s game eventually reaches, it is likely that his greatest influence on the game will be the inspiration and connection that he provides to youngsters and adults in taking up the game. His down to earth demeanour and willingness to give up his time really resonates with junior golfers and adults alike and gives them a more ‘human’ type of hero to follow and emulate.

With his game trending in the right direction and his influence in the sport growing, look for the galleries cries of ‘Beeeeeeeeeeeeeeeeeeffffffffffffffffffff’ to grow ever louder in the next couple of years. He’s great for golf.