Eddie is the voice inside my head.

Eddie is just like me – autistic, semi-intelligent, driven, lacks humour and a family man. The difference is that Eddies positives and negatives are both much more extreme than my outer self.

As in ‘That is so fucking amazing – the best shot I ever hit – I may enter the Open this year’ or ‘If that tosser does not speed up his pre-shot routine soon I may just set his Powakaddy to 9 and yell run Forrest’.

As you will find out – Eddie swears. A lot. Well I guess you would be the same if nobody else could hear you.

Eddie was named after Eddie Pepperell – the intelligent, charismatic, down to earth English Tour Pro who also likes to blog. My Eddie is nothing like the bloke he was named after but in a weird way wishes that he was.

We join Eddie and I as we approach the 15th tee at Notts (Hollinwell). On this occasion we are going well having only dropped one shot on the first 14 holes and needing a good finish for our first victory of 2018.

Tee shot – 439 yards!!!! O bugger I really need to hit Driver. But I haven’t used it since the 6th and then it did not go too well. So 3 Wood? No I really need to catch the downslope at 250 to make my approach easier.

Now – deep breath and keep your grip pressure loose through the ball.

The swing is smooth and the ball takes off down the middle with a slight draw taking it towards the bunker. It takes a lucky bounce over the corner of the sand and settles into the semi-rough, missing the downslope to leave a longer approach shot.

The ball takes off on a high arc from the upslope directly towards the pin. It sails 15 yards over the flag, pitching into the steep slope at the back of the green.

Chip shot – Choice between 54 and 58 degree wedge. You are shite with the 58. So the 54. Now take normal stance. That won’t work as you will fall over onto your face. Assume manufactured stance with extra wide feet. You look like a sumo wrestler trying to snowboard. Forget that.

Ball pitches short of the hole but runs 25 feet past.

Putt tracks towards the hole but comes up 3 inches short. Taps in for bogey but 2 stableford points.

Tee shot – Where the absolute fuck do I aim here? And which Club? (These statements were not just bluster – Eddie genuinely had no idea the target line on the short dog-leg.)

OK I have hit a good shot here before – 3 Wood to the corner.

A sweet strike straight down the middle into perfect position.

Second shot – 84 yards. Perfect 3/4 sand wedge. May need to hit it hard though as it is slightly uphill.

Hits it hard. Good strike flies over the pin, pitching 20 feet past at the back of the green. Ball takes the spin and starts back towards the hole. Ball lips out of hole and continues to roll another 20 feet to the front of the green.

Holy shit – I am Sergio Garcia! (He did hit 5 in the water though Eddie).

Putt: Straight up the hill. Please do not leave yourself a 2-footer coming back down.

Leaves the putt 1 foot short. Taps in for Par.

Tee shot – You are a hero. Time to take Driver and reach the green in 2. (Fairway is 10 yards wide at Driver distance between bunker and gorse).

3 Wood as straight as an arrow to the wide part of the fairway short of the bunkers.

Sweet 5 Wood to the fairway short of the green.

Lovely pitch shot spinning to 4 feet above the hole.

Putt – 4 feet down the hill for birdie. Aaaaaaaaaaarggghhhhhh!

Tee shot – No way I am hitting Driver after so many good 3 Woods.

Slightly necky 3 Wood fades to the right side of the fairway.

Second shot – 230 yards!? Should have hit Driver from the tee. At least I can’t reach the clubhouse behind the green now though. 5 Wood. Keep it loose.

Solid enough 5 Wood floats on the breeze, coming up just short and right of the green.

Third shot – Up a steep bank at the front of the green with hole central on the putting surface. Reckon I could spin a 54 degree to stop on a penny next to the hole.

Don’t be a knob – you are not actually Sergio Garcia. Putter.

Putt is ok but slightly mis-read and firm. Comes up 8 feet away.

Lack of concentration and conviction. Putt never on-line and finishes right. Taps in for bogey and 38 stableford points.

Result – In the end it turns out that 38 points was enough to take the victory. Eddie was delighted but also realised that he had learnt a few lessons. He had made many good choices during the round but also plentiful bad ones. He realises that he does not have to play perfect golf to win stuff – it turns out that sensible and solid can often be enough.

I think that Eddie and I will always bicker. Eddie is rude and frustratingly negative – but you know what – we understand each other and I have learnt we are pretty strong and successful in golf and life as long as that is the case. 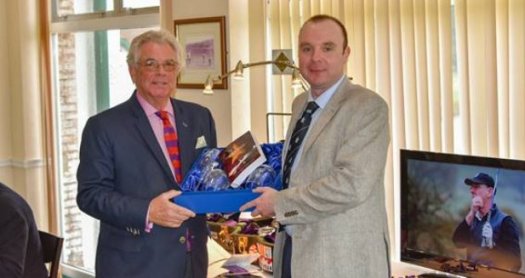 2 thoughts on “Meet Eddie – the golfer inside my head”